Crafting On - Getting Close

Linking up with Nicole at Frontier Dreams and her Crafting On blog hop!!

I've been a bit quiet on the blog lately, but no worries, I've been keeping my hands busy behind the screen:)

I've mostly been working away at the John Deere baby blanket AND.... 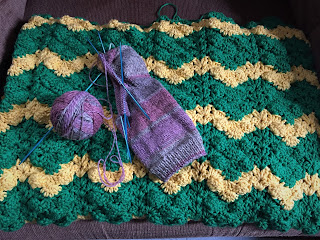 Yep, I've learned to turn the heal on my sock!!! The above picture captured the color of the blanket pretty well, but made the sock look purple. The picture below is almost dead on with coloring:) 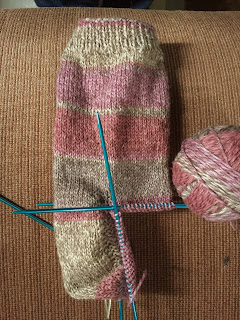 All that is left is the foot and toe, and after looking at the instructions for both, I don't think I'll have any problems with it. I'm so excited to have gotten past the heal turn, and after watching a video or two, it really wasn't all that hard!! I can't wait to get this one done and start all over again:)

Hopefully by next week I'll have cast on the next sock and have the baby blanket done and ready to go to the expectant parents!!  Then I'll have to see what I'll work on next;)
Posted by Shannon Meyer at 12:53 PM 3 comments:

Linking up with Wendy at Sugarlane Designs and FNSI.

I'm a bit late this time (again) as Friday nights tend to be hard to find time to sew. I planned well this time and started on Thursday, but then I melted a zipper to the fabric (OOPS!!) and needed to run to the store. That's okay though, lesson learned:)

I had planned to work on a hanging 'tuck' finish for a spring design I stitched, but I then I started working on a zipper bag that my sister in law wanted for a friend, and well, that's when the zipper accident happened. I persevered, and now have a matching set all ready to go... 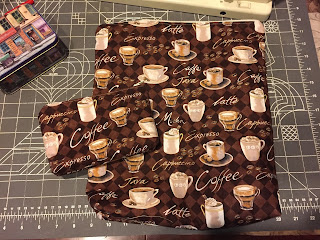 And I'm SUPER excited about my new labels!!! I'm getting so close to being able to open up an Etsy store:) 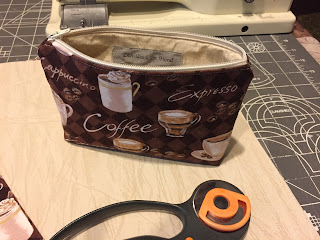 I do, however need to work a bit more on sizing. I'm going to have a few people look at the sizes of these with their stitching projects (my sister-in-law uses her bags for stitching). I'm sure this would work well for larger knitting/crochet projects, but I think the big bag is too tall for stitching. We will see what they think:)

Off to see what everyone else was sewing:)
Posted by Shannon Meyer at 3:45 PM 4 comments:

Usually I post knitting or crochet updates when I link up with Crafting On, but as I am working on the same thing I have been for several weeks (and didn't get very far with it this last week), I thought I'd post something a bit different.

I LOVE to knit and crochet, but my first love was cross stitch. I did my first project in high school sewing class when we had to choose one project that was not machine sewn and after that I was hooked. Back in the early 90's the choices for patterns was much more limited, and in my opinion, not nearly as nice as what we have today. Today we almost have too many choices, and as I have lots of patterns already, and lots more that I want, I know that I will never actually have time to stitch them all - but I really should try;) 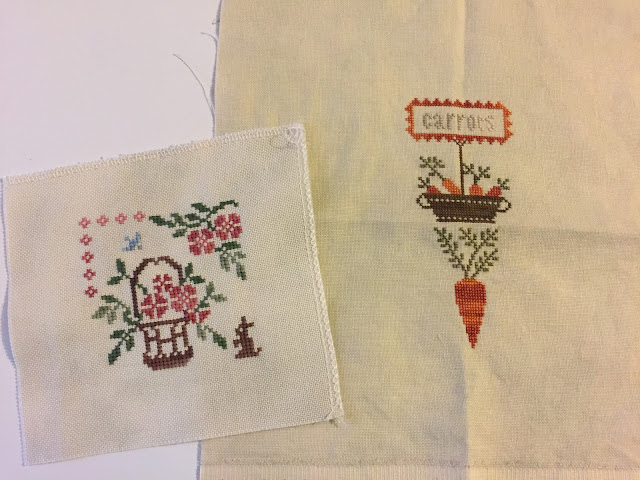 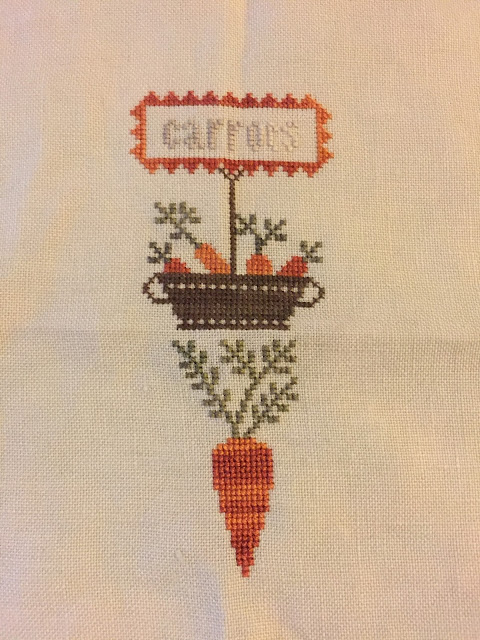 This adorable carrot pattern was designed by SubRosa as a freebie offered a few weeks ago to whomever purchased a pattern from her Etsy shop. I thought I could get out of there with just one pattern and this freebie, but alas, I purchased two patterns and have plans to go back for more!! :) This will make into a pouch that holds a couple felt carrots. The pattern for the felt carrots was included in the freebie. I don't see that this pattern is available right now, maybe she'll release it for sale at a later date. 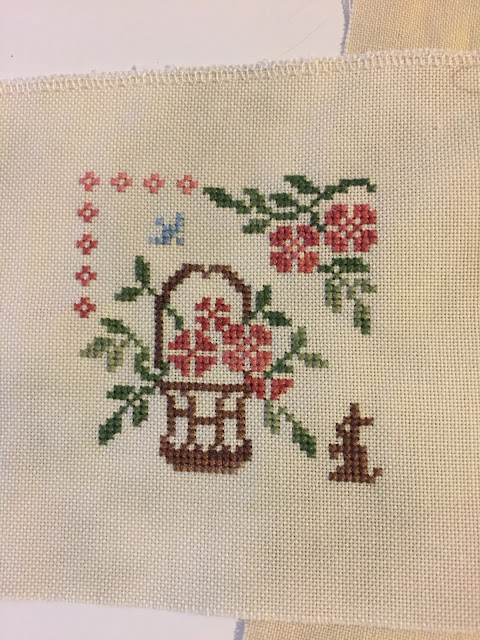 And this pattern is the latest release from Marianne Meyer of Midnight Stitching (she's my sister-in-law:). She released a set of seasonal pincushion patterns and while this one was originally charted to be one color all over, I thought it would look cute in multi color:) I think I'm going to make a tuck hanger for this instead of a pincushion, but I'm not sure yet.

My plan is to use the time set aside for this Friday's FNSI (Friday Night Sew In hosted by Wendy at Sugar Lane Designs) as my time to finish these up. We will see how far I get:)
Posted by Shannon Meyer at 10:47 AM 6 comments:

Crafting On - Learning Something New

Linking up with Nicole from Frontier Dreams and her Crafting On Blog Hop.

I'm a little late this week with my 'Crafting On' link:) I had a wonderful day yesterday, getting together with my sister-in-law (Marianne Meyer of Midnight Stitching Designs) and meeting a new stitching friend. We met at the cutest little coffee shop and stitched and talked for a while. The new friend had to go to pick up her boys after a while so Marianne and I stitched a bit longer, went out for lunch and the visited a quilting shop before I headed back home. They meet each week, but as it takes me an hour to get there, I only am able to go every now and then. It was really nice to get out of the house and meet up with some like-minded sisters:)

I haven't only been stitching and gabbing around here:) I've also been crocheting...
And knitting...
I really needed another knitting project going!! hahahahaha  But I am super excited to have started my first pair of socks. This was the whole reason I wanted to learn to knit in the first place!!! After looking for a couple years at instructions that I didn't understand, I decided to take the plunge. I still don't quite understand what I am suppose to do once I get to the heal flap, but I figure there is always You-tube for that:) I also am pretty sure I want to try every other way to knit socks other than on dpns, but it was the one way that I knew how to get started, so I went with it. It is my goal to fill up my sock drawer with hand-knits, so I guess I'll have lots of opportunity to learn all the different ways of knitting them:)

Off to see what everyone else was up to this week!!
Posted by Shannon Meyer at 9:57 AM 2 comments:

I had hoped to have my 'FINISHES' all finished up this morning so I could post earlier in the day, but...life!! So after spending most of the day in town running from here to there, I finally came home and sat down to the sewing table - aka the dining table - aka we don't have a dining room, so it's really a table in the middle of the kitchen, but you get what I mean:)

I have TWO projects to show off today!! The first is one that I stitched quite a while back. So far back that I really can't remember when, but at least 3-4 years ago.  I thought I'd have it done to show off on Friday but I was having troubles finding a nose for 'him'. The original model used a 'carrot stick'? or something like that and they cut a hole in the face of the snowman to place it in. I didn't want to cut into my snowman, I wanted a carrot button. I thought this would be pretty easy as Easter is just around the corner, and I did find a few but they were very cutesy and my snowman is a little on the rustic side. So, I went to Etsy and found the perfect carrot buttons...
Here is my naked snowman...

And here he is all dressed up!! 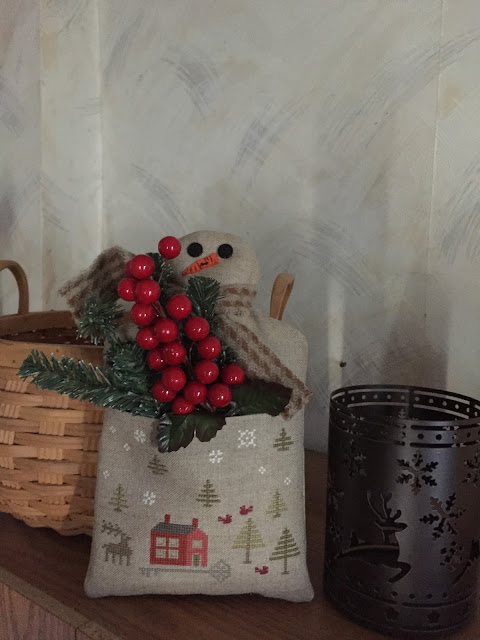 I also finished stitching a project that was to be my mother-in-law's birthday present (last week!!). I did show her what I had done on it and asked how she wanted to display it so I would know how to finish it. She wants a hanger similar to mine (which is the one pictured). All that's left to do is order the one I found for her!! Oh, and start on 'Summer' Wordplay - I'm going to use the August chart for 'Summer'.
I'm really liking that I'm starting to make my projects into something almost as soon as I've finished stitching them. I still have loads of stitched projects that need to be displayed, but one thing at a time!! :)
Posted by Shannon Meyer at 6:50 PM 2 comments:

Crafting On - It's Growing!!

Linking with Nicole of Frontier Dreams and her Crafting On blog hop.

Other than a few hiccups with finding the right dye-lot for the green, I'd say the 'John Deere' baby blanket it coming along nicely!! The colors are even growing on me:) It is starting to remind me of a bright, sunshiny, spring day!! 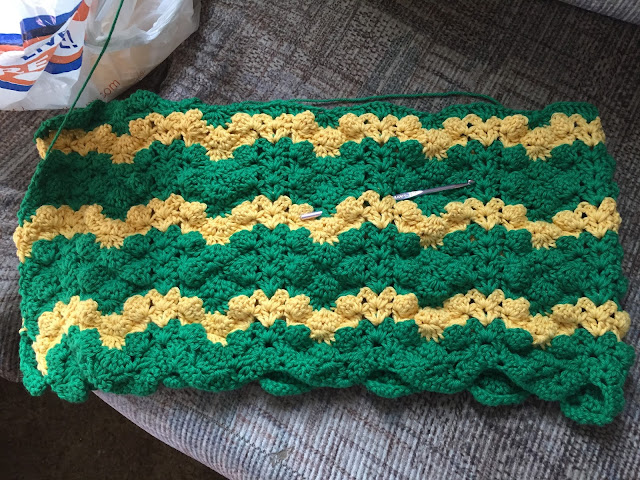 I didn't even pay attention to the dye lots as I don't usually have problems with this yarn, but the two on top don't match. The color is close, but they are a lot more dull than the others. I had to go back to the store and only found 2 in the same dye lot, and then to a different town where I bought the 4 skeins they had. There is one more store close enough to check if this is still not enough, but I'm hoping it will be. The yellow was fine and I'm sure I have enough of it now:) 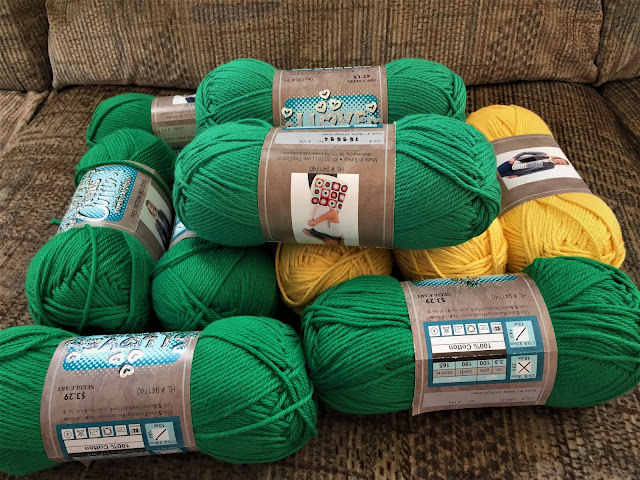 The colors almost match my tulips (and dandelion patch!!) perfectly... 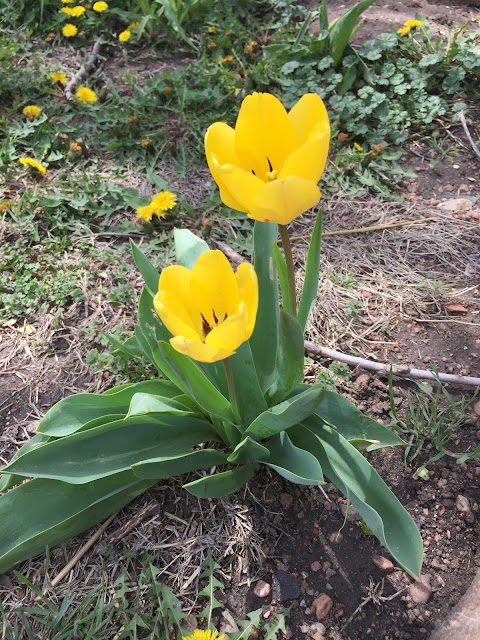 On other crafting notes: I'm just about finished with my mother in law's birthday stitching now, and am itching to get back to the carrot bag stitching project too!! I just love keeping my hands busy:)
Posted by Shannon Meyer at 11:01 AM 3 comments:

Email ThisBlogThis!Share to TwitterShare to FacebookShare to Pinterest
Labels: Blog Hop, Craft On, Crochet, In the Garden, Yarn

I was doing so good, plugging along on stitching a piece for my mother-in-law's birthday, when I got side swept into buying a new project!!!

See I had been working on this piece...
And coming along nicely on it too. It's a fun and pretty quick stitch;)

But then I was scrolling through blogs and came across SubRosa's blog. I have admired her designs for a while now, but had resisted buying any as of yet. However she had the cutest carrot bag design as a freebie to her costumers...
All you had to do was browse around her Etsy shop, purchase a design and you'd get this free design with it. WELL... It was a 'free' design, how could I resist? I ended up purchasing 2 of her designs and have several more that I want to get in the future.

I knew that if I started on this one I'd never get 'May WordPlay' done in time for my mother-in-law's birthday - which is this Wednesday if you were wondering, but I just couldn't help starting on it!!! 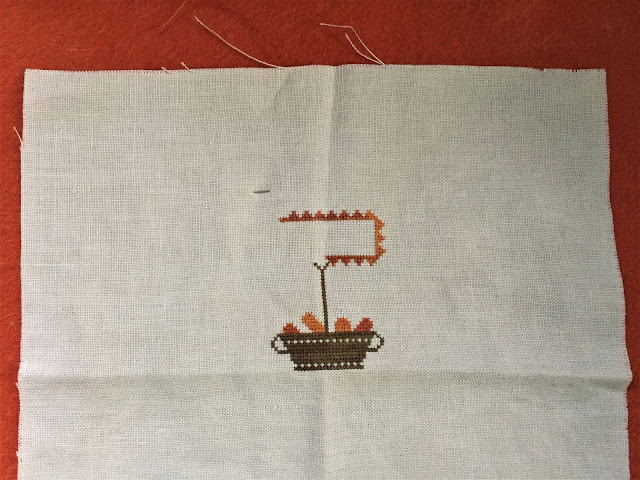 I've managed to put it down, and hope I can get my mil's gift done really quick so I can get back to this!!
Posted by Shannon Meyer at 2:14 PM No comments: