Linking with Nicole at Frontier Dreams and her Crafting On blog hop.

I'm still working away on my Tidal Sands Cowl. When I last posted, I was tinking back, and after that I knitted away for a while and realized that I still had a mistake back near the first one, so I tinked back some more (@#$$@#)!! I did finally remember what I HAVE to do every time I knit a lace pattern - COUNT!!! I have my project set up with a stitch marker every 40 stitches to make that easier, I had it set up that way from the beginning, but I was being bold wreak-less, and not counting as I have the pattern memorized at this point. Hmm, obviously it doesn't matter.

Anyhow, I'm back to making forward progress on it... 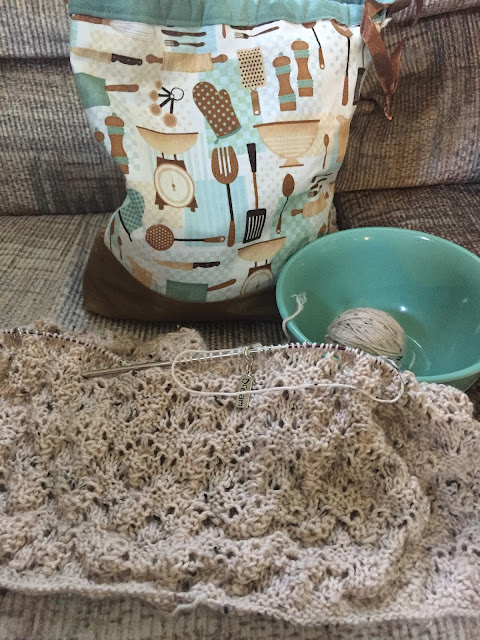 When I pulled this back out a couple weeks ago I was just starting on the 4th repeat and after knitting, tinking, knitting, tinking and knitting some more I am halfway through the 5th of 7 repeats. My daughter said if I liked knitting it so much I should make another one instead of re-knitting the same one over and over. Yeah, she's pretty funny:)

I also decided to pull out the curtains that I knitted quite a while back. I still needed to weave in the ends, wash and block it and then sew the top into a tab to put the curtain rod through.... 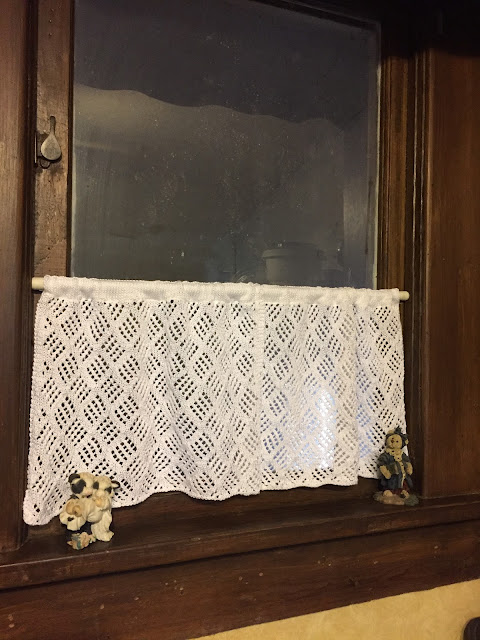 This window is over my kitchen sink and would have originally looked outside to the back of the house. At some point a porch was build and then turned into an extra room. My guess is that this was used as a wash house as this house was built in 1920 in the heart of Kansas, where there wasn't electricity until around the mid to late 1940's (the house still has some of the original wiring). As there was no electricity, there was no bathroom. A small room was made by way of cutting off one of the 2 bedrooms and a toilet and sink fits in it, but our shower is actually located in this room off the back of the kitchen, you guessed it, in direct view of this window:) This has been a problem for several years now as our daughter isn't allowed in the kitchen when her father is in the shower, and vise-versa - somehow it doesn't matter one bit if I walk through or if I'm in the shower. :/ So I promised to make these curtains years ago, and now they are finally done!! :) Daughter will probably decide to move out any day now,  HAHAHA!!!! I used THIS free pattern and I really love how they turned out:)

Okay, now off to see what you have been up to.
Posted by Shannon Meyer at 3:52 PM 3 comments:

I have been able to get in time on both my knitting and stitching lately (summers are so nice!!). Here are a few thinks I've been stitching on. 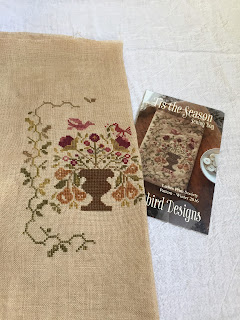 This is Tis the Season by Blackbird Designs. It was an offering with the Ladies Prim Society Club last year so it should be released for purchase sometime this year. I love the design on the front of what will become a drawstring bag. However the back side - not shown in the picture - is of an alphabet with 'Merry Christmas/Happy New Year' on it. I'm not sure I want this to just be a holiday bag, so I'm thinking of changing what it says, but not sure what to yet. I still have a bit of the boarder to do on the front and that boarder wraps around to the back as well, so I have a ways to go before I need to make a decision. 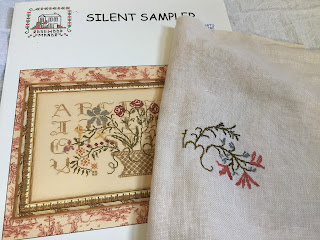 This was a new purchase for my birthday last month. I REALLY don't need new stitching projects, but I had seen this one done up a few years ago and the stitcher did the alphabet super light as to just barely show in the background, and I loved the effect it had. So when I saw the chart, I decided it was time to make this as well. I am stitching it over one on 32 ct Toasted Almond linen with a few color modifications. 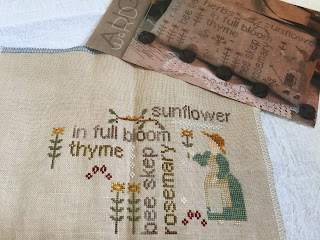 And finally, this is 'August Wordplay' by Brenda Gervais (With Thy Needle and Thread). I'm making this for my mother-in-law as a seasonal piece that she can change out. This one will be changed to 'Summer' instead of 'August'. Getting close to done with it and then I'll have to start playing around with the next one:) I really like these as seasonal charts (instead of monthly, because I'm not as fond of the ones that mostly depict holidays for the month) and keep thinking that I'll have to make a set for myself. If you are wondering I am using January for Winter, May for Spring, August for Summer and then I'll have to really play with October/November and another chart of hers that I have to make a suitable Autumn. October is heavily 'Halloween' and November is mostly 'Thanksgiving', but there are parts of both that I can use. That one will probably take a while to figure out:)

Well, unless another project screams out to me in the meantime (which is altogether likely), I hope to have the Wordplay and the Blackbird projects done by the end of this month, Silent Sampler will likely be put away and brought out again several times before it gets finished.

Have a lovely, stitchy day!!
Posted by Shannon Meyer at 9:39 AM 1 comment:

Crafting On - Keep on Knitting

Linking up with Nicole at Frontier Dreams and her Craft On Blog Hop.

I am still mostly knitting on my sock. I got down to the heel flap on what will be the first usable sock... 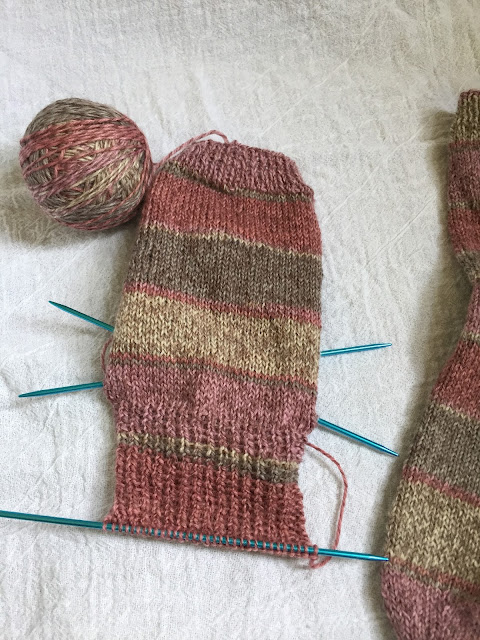 But then I decided I needed another project to work on as well. I really want to start something new, but I also really want to get a couple things completed first. So I pulled out my Tidal Sands Cowl... 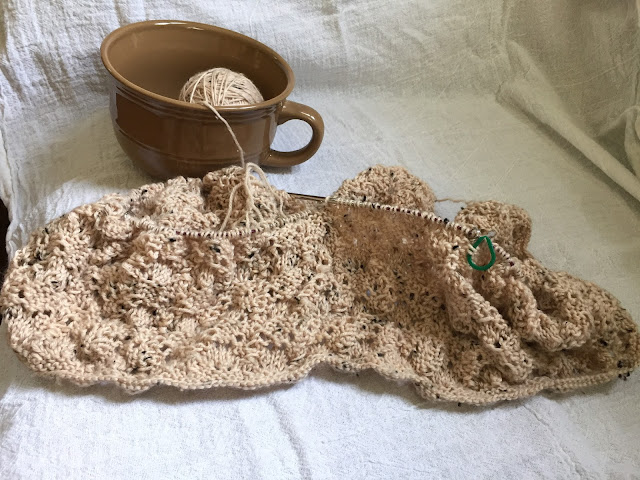 This project is just not wanting to cooperate with me!!! I pulled it out to knit on it, and after two rows around (over 600 stitches) I realized that there was a mistake a couple rows before where I started. :/ Hmm, maybe that was why I put it away in the first place? But not this time, I'm tinking away on it, going to fix that mistake (and the few others I made while tinking back lace) and then go from there.

I just joined The Knit Girllls Stash Dash on Ravelry so that is a little more incentive to finish up some WIP projects instead of starting something new:) I would really like to be able to complete the 3K finish line, but if I'm being really honest, I'll be doing good to finish the 1K!!

Now I'm off to see what you've all been working on!!!
Posted by Shannon Meyer at 9:16 AM 2 comments: