We've been having a super hot summer this year. Temps that normally don't hit until August have been with us through most of July. We've had 100+ degree days more than I'd like to remember with other days very close to that (though we did have a few nice days here and there:). Yesterday and today have been very nice however, and it has prompted me to get out for a couple walks and get some pictures of our place and some of the critters running around here:)

Yesterday the kitties were out playing... 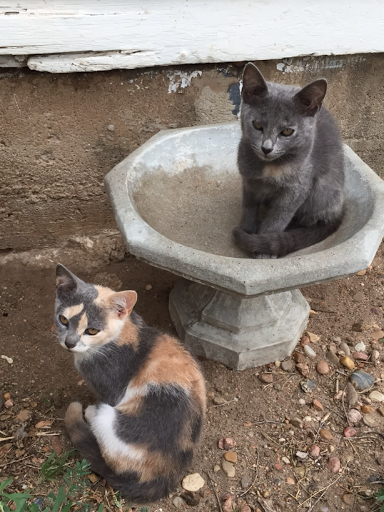 The gray one above is Mouser, the calico is Lily and the torte below is Tulip. They are all sisters. 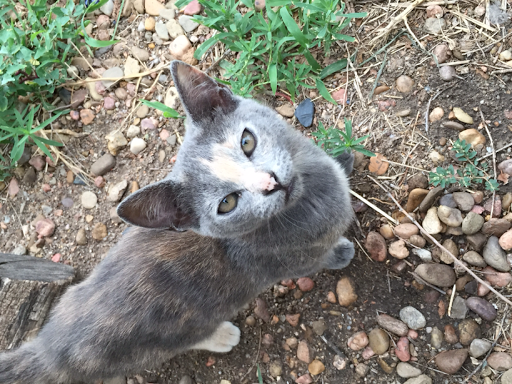 And the horse was not out!! If there is even just a sprinkle this horse wants to be in the barn!! 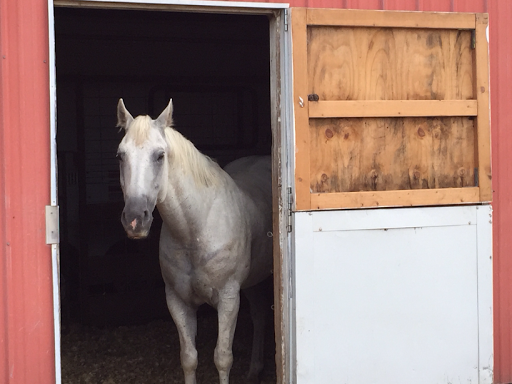 And then there are the gardens... 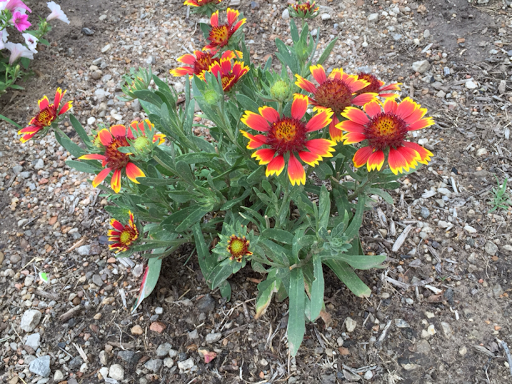 Growing a new variety of 'tomato' 😂 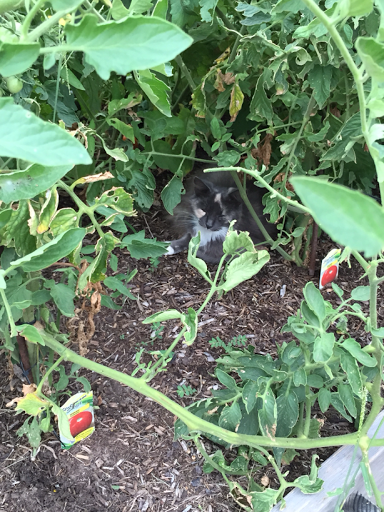 Today I ventured down the driveway and took a very squishy walk down the road as we got a little over an inch of much needed rain. Maybe a bit too much all at once... 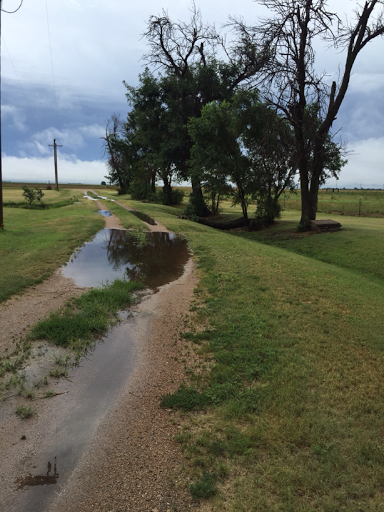 This little guy might look miserable, but he really loves running around in the rain and mud:) 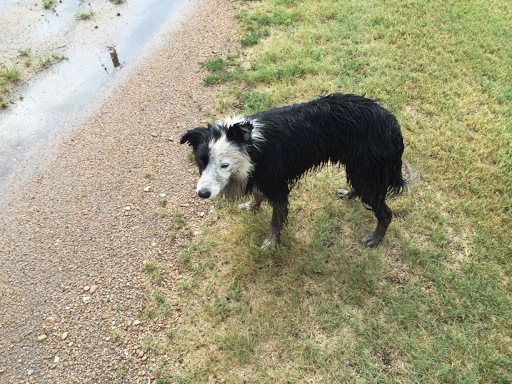 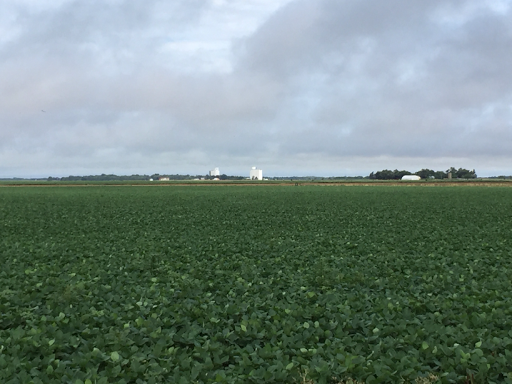 A peak towards our pasture... 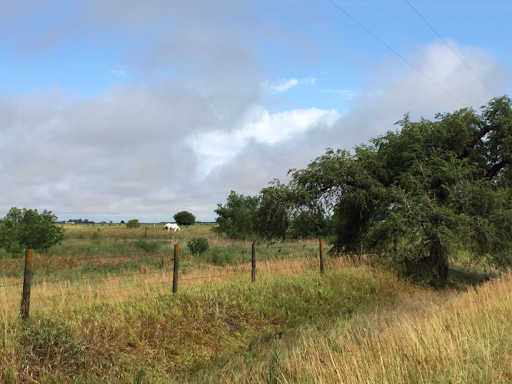 And a pretty little spot on the other side of a bridge... 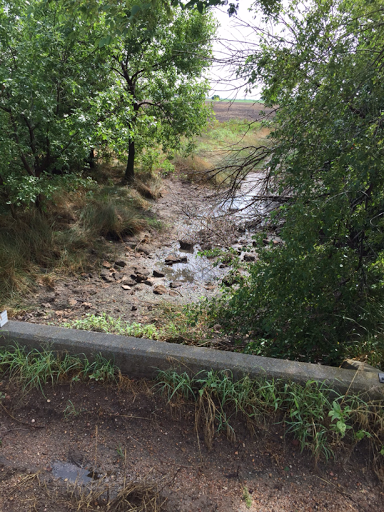 I've been getting a little knitting done as well... 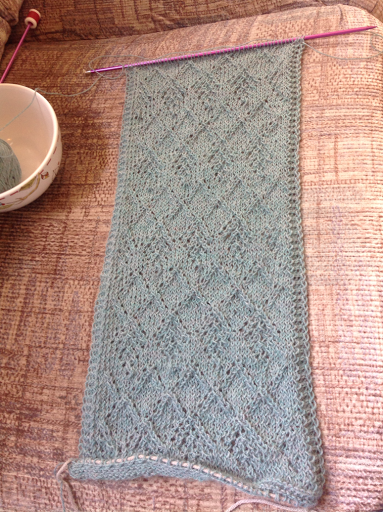 Along with the walking about and knitting, I've also been doing a little yoga this week. I am loving the Yoga Studio app!!

What have you been up to this week?
Posted by Shannon Meyer at 6:19 PM 2 comments:

Email ThisBlogThis!Share to TwitterShare to FacebookShare to Pinterest
Labels: Barnyard, In the Garden, Knitting, Yarn

As I said yesterday, an update on my knitting...

I've managed to carve out some time this summer, between the barn chores and gardening to do a bit of knitting, even starting a couple projects even though I had decided I would wait;) But what is the fun in waiting when there are SOOO many projects that are just begging to be knitted? :) So here are the main projects I have been working on..

First off, I have a finish!! I made Tanya Marie Willis Anderson's (aka The Sampler Girl) Anne's Imagination Cowl. It was very easy to make and very pretty too. 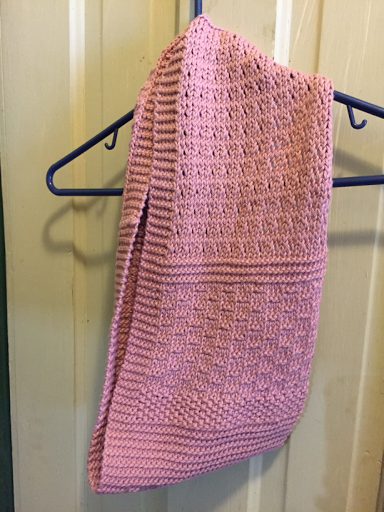 Next is the Guernsey Wrap by Jared Flood. I love this project, partly because of the simplicity of the pattern but also because of the bamboo and silk yarn. It is super soft and will be very warm this winter. I am sitting at 90% done now, hoping to get this done early next month. 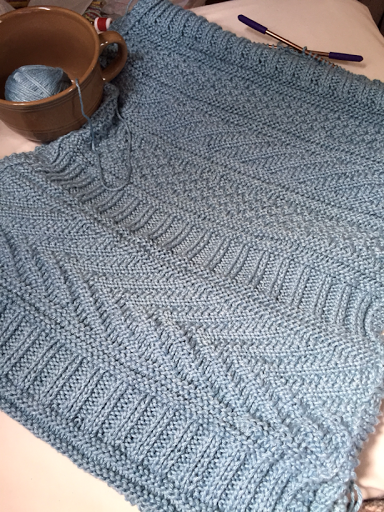 I started another of Jared Flood's designs just yesterday. This one is called Celes. It has quite a few design elements that I've never done before so the going is pretty slow (like, I just ripped it back to the beginning - again!!). It has a provisional cast on, will need the use of the Kitchener stitch to graft the two halves together and then I will pick up stitches to do the boarder around the whole thing. I've learned not to panic too much about new stitches and techniques and to take them one at a time as they come, and to heavily rely on You Tube to help:) I've been working on the Guernsey Wrap since January, I'm pretty sure this one will take at least as long to complete!! And yes, the yarn color is very close to the one above, just a bit more green. I can't help myself, it's the color I keep going to for everything. My phone case is pretty close to it too!! 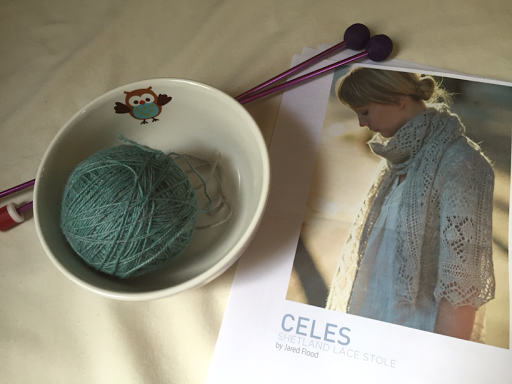 And then there's this one. The original idea of this one comes from The Sampler Girl's Captain's Row. Except I'm changing it a bit, so it won't really look like her design, but the main pattern will be hers. This will be a head scarf, or a head band, what ever you want to call it. I'm not sure exactly what it will look like yet as I'm kind of playing with it as I go. It's kind of fun as this is the first design that will be partly mine and it's simple enough for me not to get stressed over if it doesn't work out:) 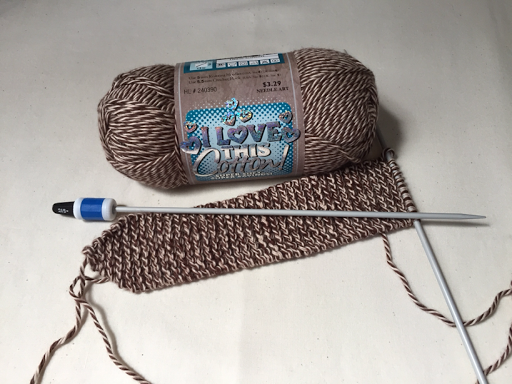 Did you see that cute bowl a couple pictures up? I found this bowl at Walmart and started putting my knitting and stitching bits and bobs in it. It works well to hold counters, place markers and scissors. But I decided to use it to hold my yarn for the Celes project. I know a yarn bowl would probably work better, but they are kind of expensive and I'd rather spend my money on yarn:) 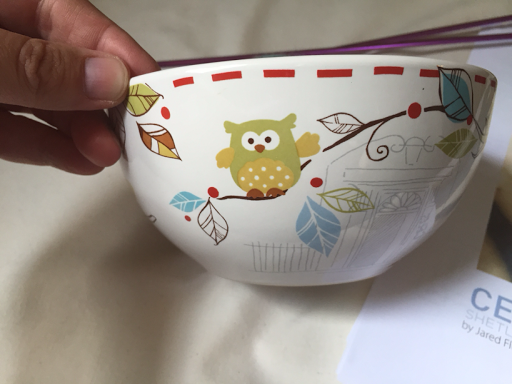 Of course I have other projects that I work on a little here and a little there, not to mention stitching projects, but this is what I've mostly been focused on. Oh, and then there is yarn coming in the mail, hopefully tomorrow, so we'll see how those projects fit in;) What are you all working on?
Posted by Shannon Meyer at 5:01 PM 5 comments:

A post from me??? Yes it is! What a different kind of summer this has been!! Dd has been gone just about as much as she's been home and all the things I *thought* I'd get done with all that free time hasn't hardly been touched.

She started out the summer helping with VBS which took up her mornings for a week. Then the next week she went to work for a local farmer family and she was gone most of every day. Two weeks later she left to be a councilor at 4-H camp and I thought I'd have 4 days to myself then, but hubby came down ill and stayed home for two days and on his 2nd day home we got a call from camp that dd was sick as well. So we went up and brought her home. A couple weeks after that she started an apprentice program at a zoo an hour away so she has been staying with her grandparents' during the week and coming home on the weekends. This is the 3rd and final week of that. Next week is the 4-H Fair, so there is lots to get ready for that (actually I think this year she won't be taking as much as normal). On top of all this we finally found her a horse last weekend!! 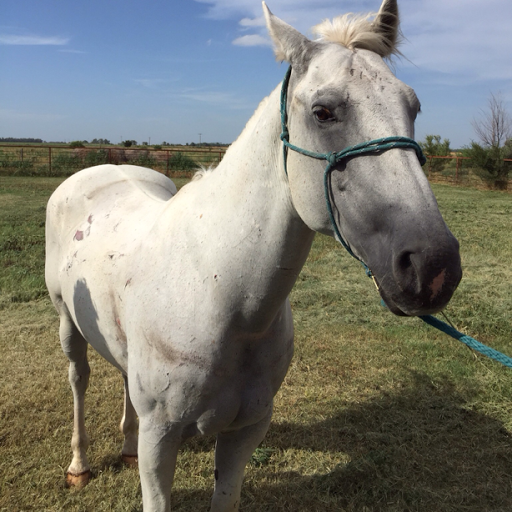 She has been waiting for this since we moved out here 8 years ago:) She is so excited, but was only home for two days before she had to leave again. We weren't really ready to bring a horse home as we need to do some work to the barn stall, fencing, and a few other things, but hubby and I have been working hard to get things done. Dd wants to be home so bad so she can help with everything, but I think there will still be plenty to do this weekend when she gets back;) We are hoping everything will be set up by the end of the weekend. In the meantime, the corral has plenty of grass and is a safe place for Phantom to be. He is a gentle horse and loves to be around people. Dd rode him a couple times last weekend even trying bareback which he handle beautifully.

I still need to learn a lot about horses as I have the least amount of experience of all of us around horses. I got a crash course on putting on a halter on Tuesday though. It was a horribly hot and humid day and by late afternoon/early evening it just felt like the weather could turn bad. I had been watching the radar and knew a storm was coming our way, but I never expected this... 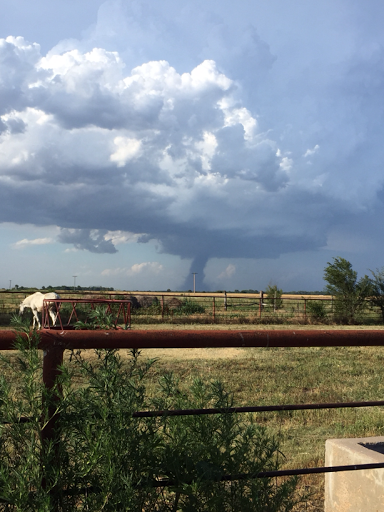 Yep, that there is a tornado. I've only ever seen one other and it was much smaller. I will admit I panicked a bit (or a lot as I was home alone and didn't know how far away it was or how fast it was coming). It turned out to be quite a ways off and even though it was coming our way, it was a very slow moving storm and it dissipated before it got anywhere near us. We did get some rain and a little hail, which the horse didn't like at all, but we got him in the barn and calmed down and he handled my wrapping the halter around his neck (instead of putting it on right, which I did figure out later) just fine.  Hoping that doesn't happen again for a long time!!

I've been doing a bit of knitting and stitching as well when I have some down time and have a little to show off which I will do tomorrow. I didn't post new goals/projects this month because I have so many that I'm working on that I thought I'd take a break from that this month, but I ended up casting on two new projects just this week and ordering yarn/patterns for two more! What am I thinking?!?!? -That it is fun, that's what I'm thinking;) Anyway, I'll update you on all of that tomorrow and maybe next week I'll do a garden post as that is coming along nicely too. Hope everyone is having a happy and productive summer (or winter depending on where you live:).
Posted by Shannon Meyer at 1:08 PM 1 comment:

Email ThisBlogThis!Share to TwitterShare to FacebookShare to Pinterest
Labels: Family and Friends 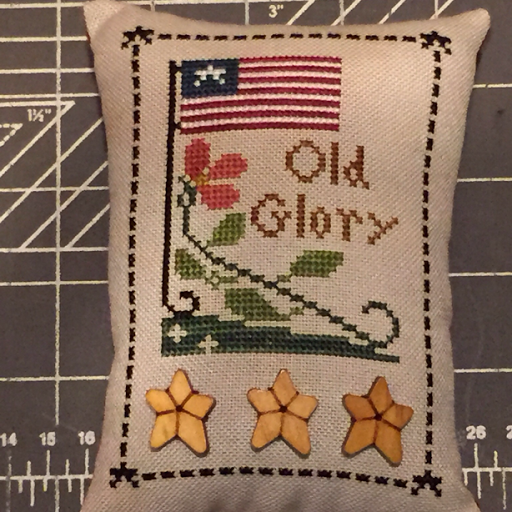